Analyzing an Http Connection With Wireshark

In this post we will use wireshark to analyze an http connection, where a client requests a single webpage from a server. Here is the output of the capture. you can do right click, open in a new tab, to see full size image. 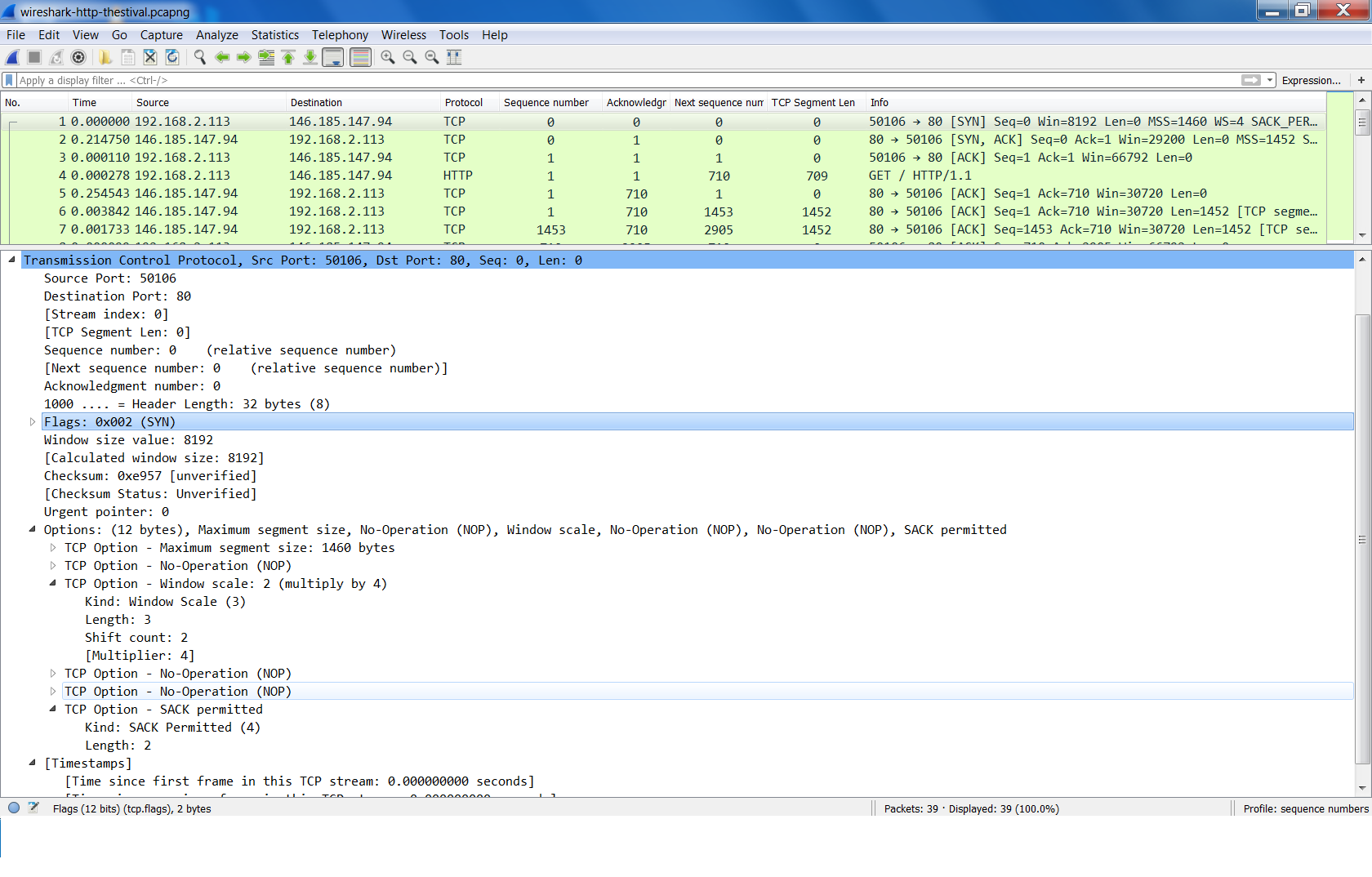 From which side are we capturing?

This is very obvious because I have as source an internal IP address, but I could have figured it out from the time interval between SYN, SYN-ACK and ACK.

So the capture is obviously at the source. In order to see the time or delta between displayed packets you have to go to View, Time Display Format, Seconds since previous displayed packet 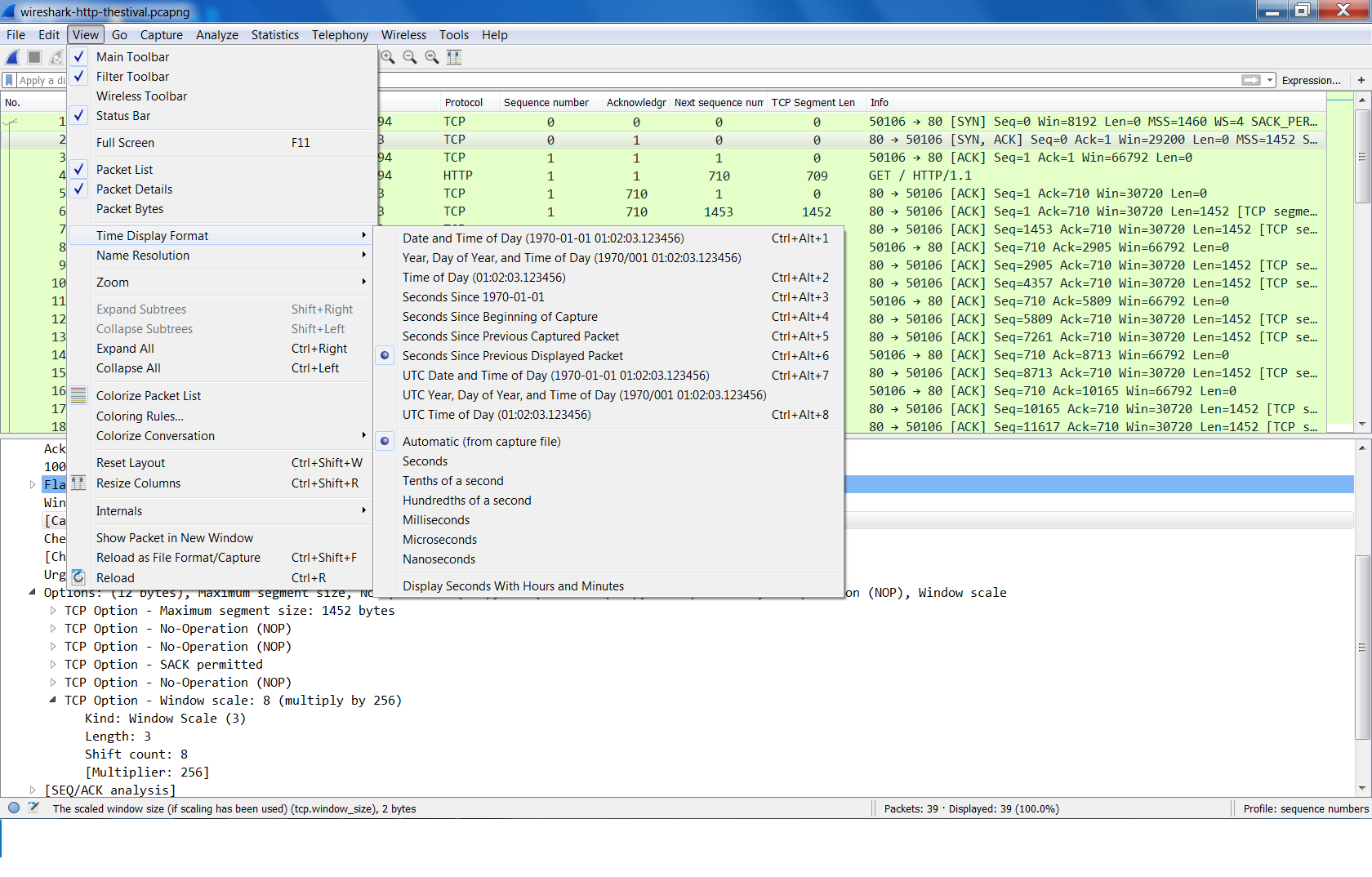 What is the RTT?

You can see also that although the tcp length is 0, the client and the server increase the sequence number by 1. this is called phantom byte. 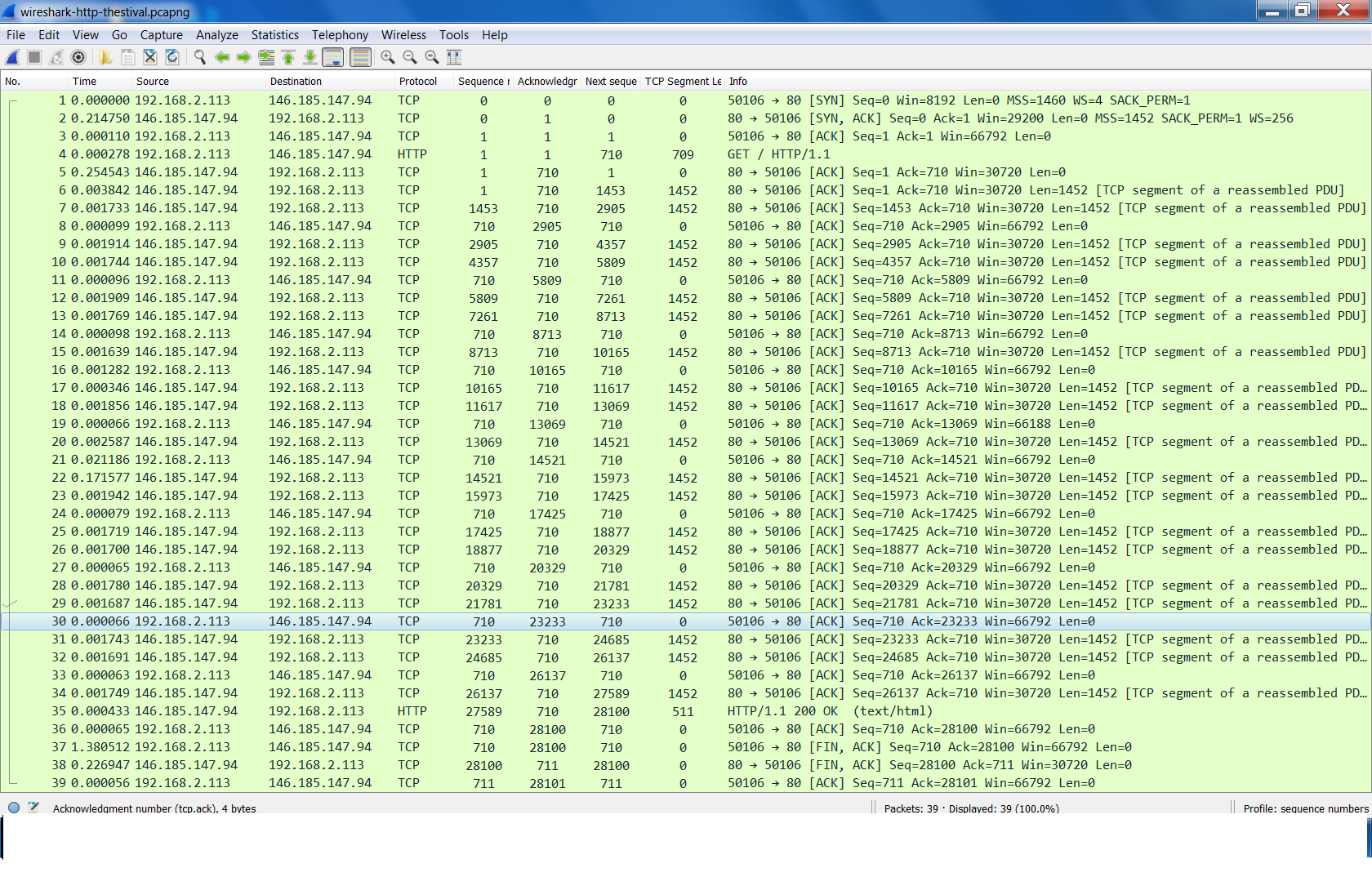 Indeed packet 5 from the server is a packet with seq 1 and ack 710 length 0. Because the server didn’t manage to send any data yet, it sends an empty ack, otherwise the ack would be piggybacked in the data.

whether the packet http OK will appear at the end of the all the reassembled pdu or in the beginning depends on the parameter “allow subdissector to reassemble tcp streams”.

so if we want to calculate http response times, in order to find when the http server responded late, it is advised to turn reassemble off. Then we can set a filter like http.time >= 0.3 to show all the http responses where the server took more than 0.3 secs to return an HTTP OK message.

From statistics - conversations, we can see that the server sent to client 23 packets and 29k bytes while the client sent 16 packets and 1585 bytes. the total duration was 2.3 secs 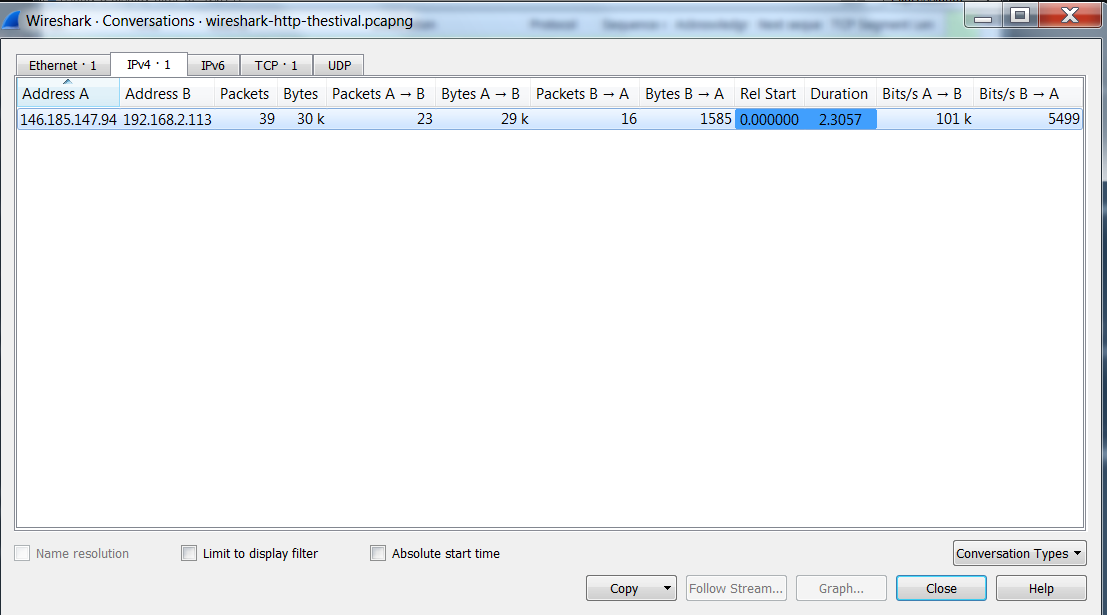 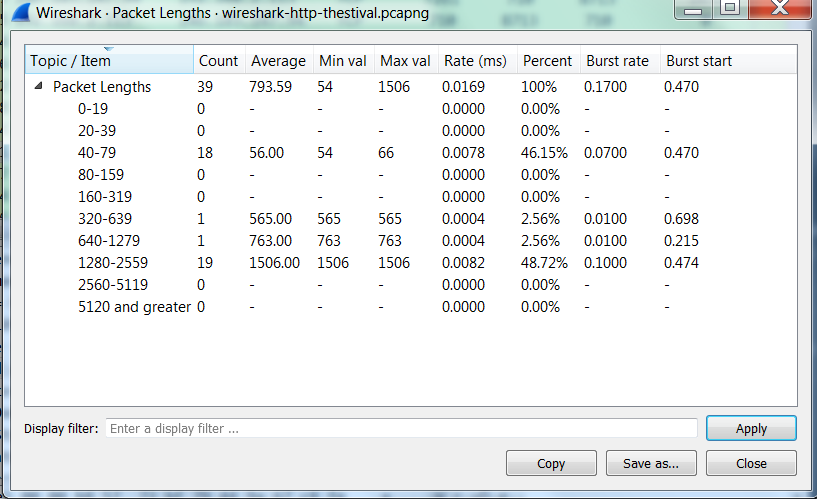 From statistics - IO graph, the packets per second. int the first second we have 36 packets and the rest 3 packets (fin, fin-ack, ack) in the other second. this is obvious if you change the time display to seconds since beginning of capture 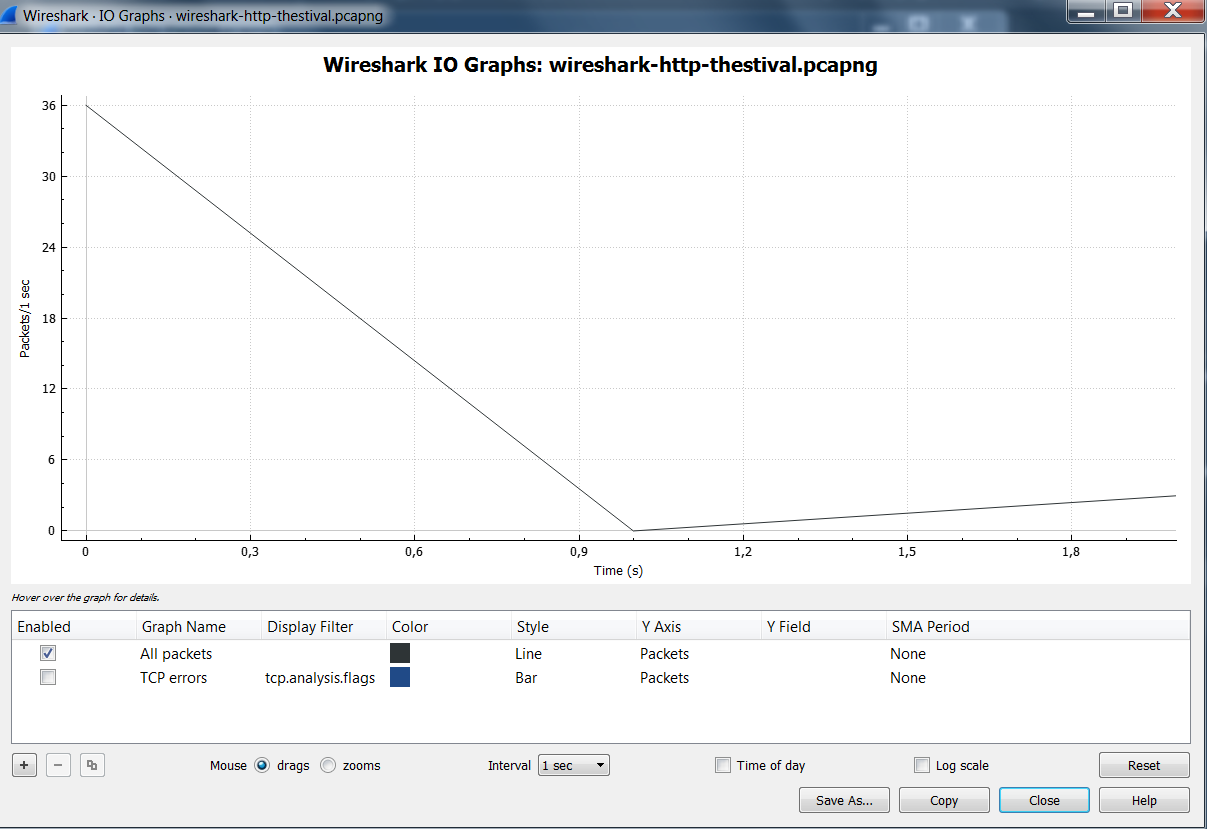 From statistics - http - packet counter, from an application protocol perspective, you can see that I only had one http request GET / and one http response 200 OK 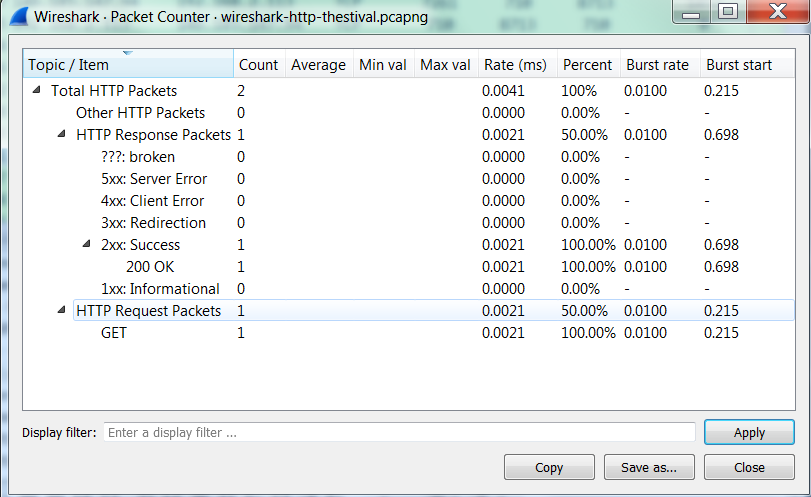 From statistics - sequence numbers - stevens graph, direction from server to client, we see there was a delay between packet 20 and 22. from wireshark we can see this delay is 0.683-0.490=0.193. this is not due to tcp window size, because the window size on the client remains constant around 66792 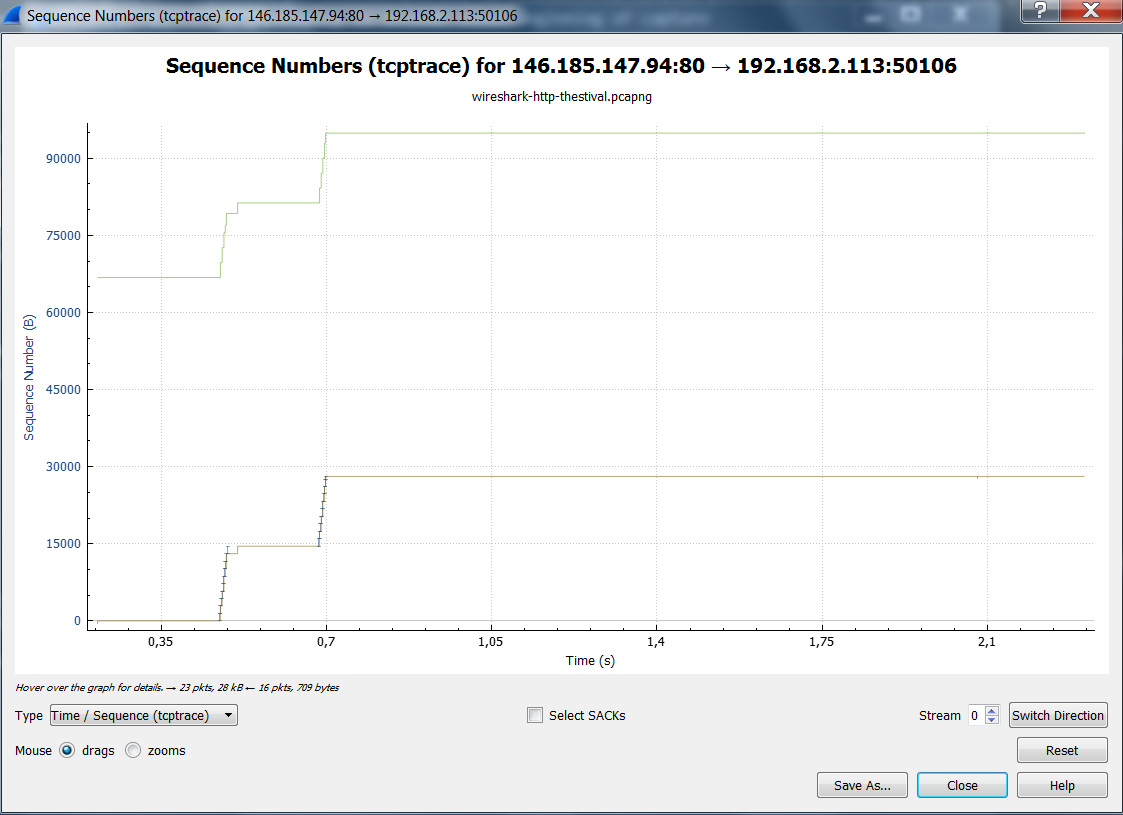 from statistics - sequence numbers - tcptrace, we see that the distance between the two lines, that corresponds to the window size is arround 66000, as much as the window advertised by the client. We also see the delay between packet 20 and 22 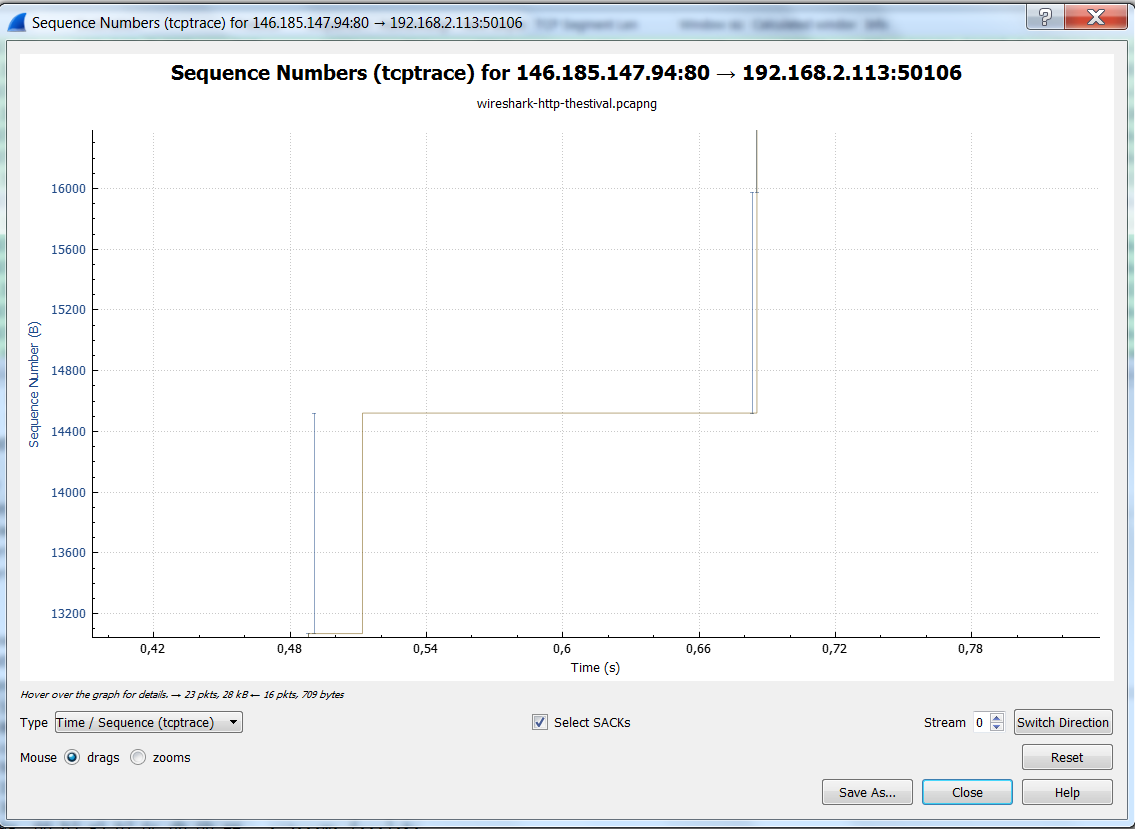