Explaining how TLS/SSL and certificates work

In this post I will explain the basics of TLS, because there is a lot of misinformation on the internet and youtube especially. Then I will analyze a TLS connection with wireshark

Transport Layer Security is the successor of SSL and provides confidentiality, data integrity, and (mutual) authentication. TLS runs on top of TCP, and sits between the transport layer and the application layer. TLS is not a single protocol but a set of protocols.

As we can see in the following figure, there are protocols that run during the handshake phase:

When using https, all http data are transfered in the record layer.

Confidentiality is achieved through encryption. There are two main categories of encryption algorigthms.

I have read many times that the client generates a session key, encrypts it with the public key from the server and sends it to the server. The server decrypts it with its private key, and then uses this decrypted key for encryption and decryption of data. The truth is that the session keys are never exchanged, but they are generated independently on each side, based on other data they have exchanged.

Session keys are computed on each side of the connection. The components used to generate the session keys are passed between the client and the server in one of two ways.

Advantage of DH over RSA

In DH, if an attacker intercepts the traffic during the handshake, it does not have enough information to compute the master secret and thus derive the keys, even if it has the server’s private key.

In RSA, if an attacker gets hold of server’s private key, it can derive the symmetric keys and decrypt the exchanged data.

A MAC is used to make sure that nobody has tempered with the data in transit and also provides authentication. This is achieved, because MAC uses a private key as the seed to the hash function it uses. This assures the receiver, that not only the message hasn’t been modified, but also who sent it, is the one you expect it from. HMAC is a hash based message authentication code.

Certificates are used for authentication and not for encryption. Usually only the server is authenticated and not the client. However TLS supports also client authentication. Certificates allows us to trust sites, that a third trusted party has said that they are who they claim to be.

The CA after it checks the authenticity of the company, creates a certificate and signs it.

Signing your certificate, means that your data is hashed and encrypted with the private key of the CA. The other side decrypts the message with the public key and compares the decrypted hash with the hash of the received message. If they agree, you can trust the certificate.

The certificate that you ordered from the CA is installed on the web server.

When the browser visits the server, the server sends the certificate, which was signed by the CA (along with certificates from ICA, more on this later).

The browser has preinstalled all the root certificates in a trusted web store. Each certificate includes the public key, so it can decrypt the signature, which was signed by the CA. If the decrypted hash matches the hash of the received message, it is sucessful. Some additional checks are performed, like if the domain name matches the one on the certificate, if the certificate hasn’t expired or revoked. If all are successful the browser trusts the site.

There are 2 types of Certificate Authorities: root CAs and intermediate CAs (ICA).

The list of SSL certificates, from the root certificate to the end-user certificate, represents the SSL certicate chain 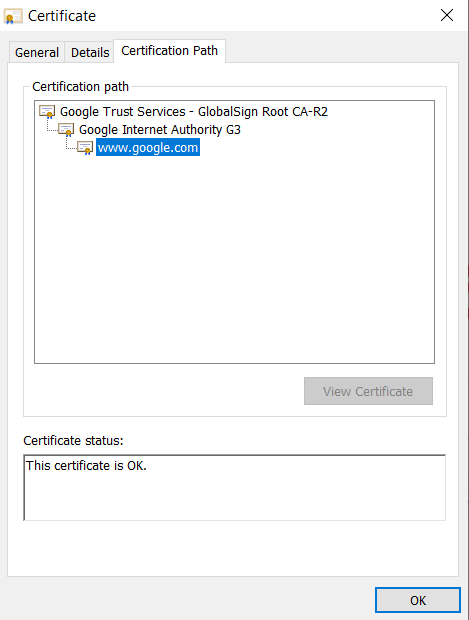 After the TCP handshake, SYN,SYN-ACk,ACK, we have the TLS handshake

in summary the steps are: 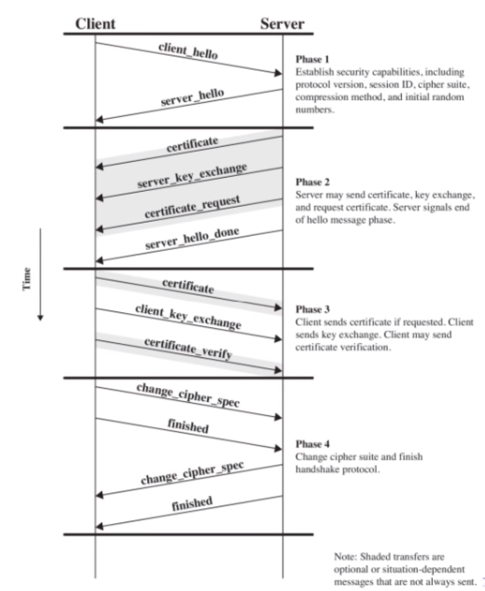 The client send a TLS hello packet with all the cipher suites that it supports. The message contains also a random byte string that is used in later computations. 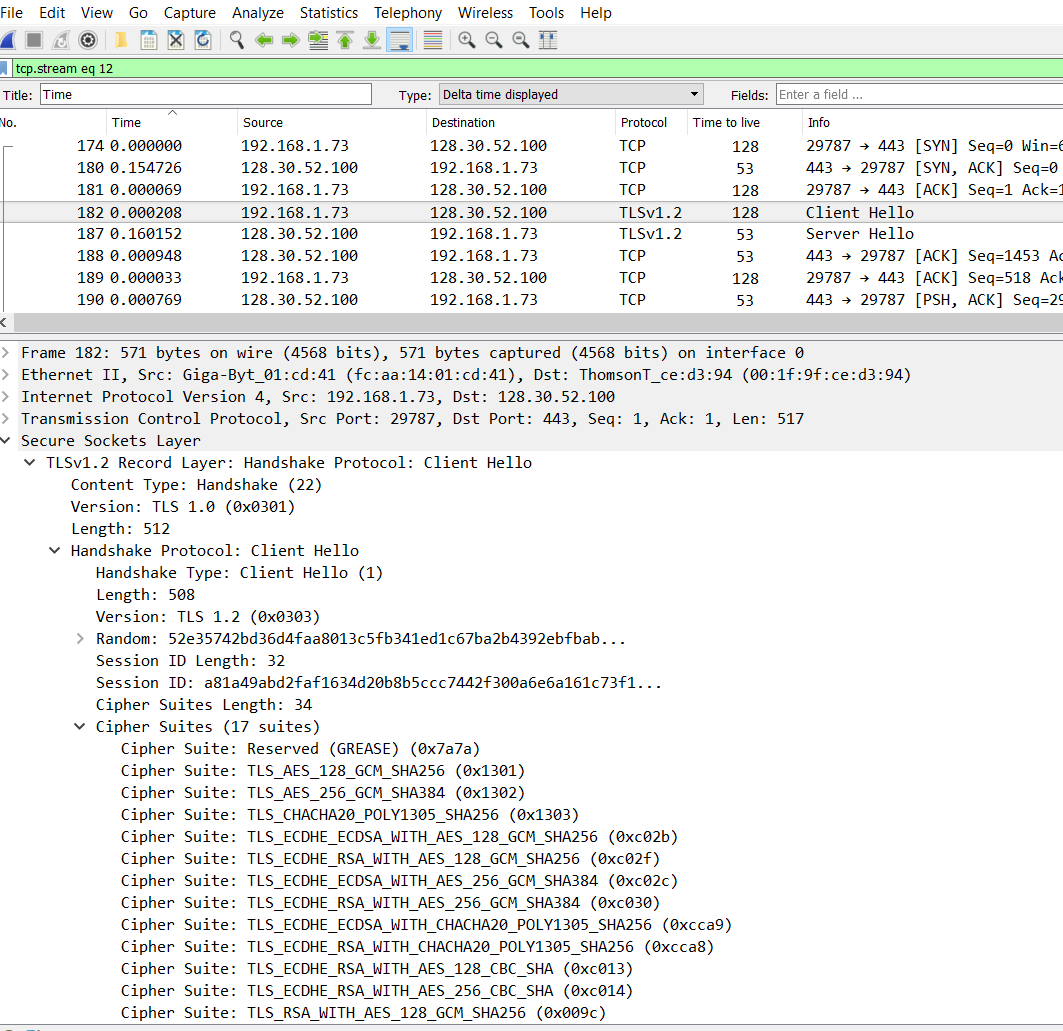 The server sends a TLS hello packet with the cipher suite that it selected (ECDHE, ellicptic curve diffie Hellman Ephemeral for key exchange, RSA for signing, AES 256 for symmetric encryption, GCM is the mode of operation of AES, SHA384 for MAC), the session ID and another random number. (If the server requires client authentication, it will also send a client certificate request.) 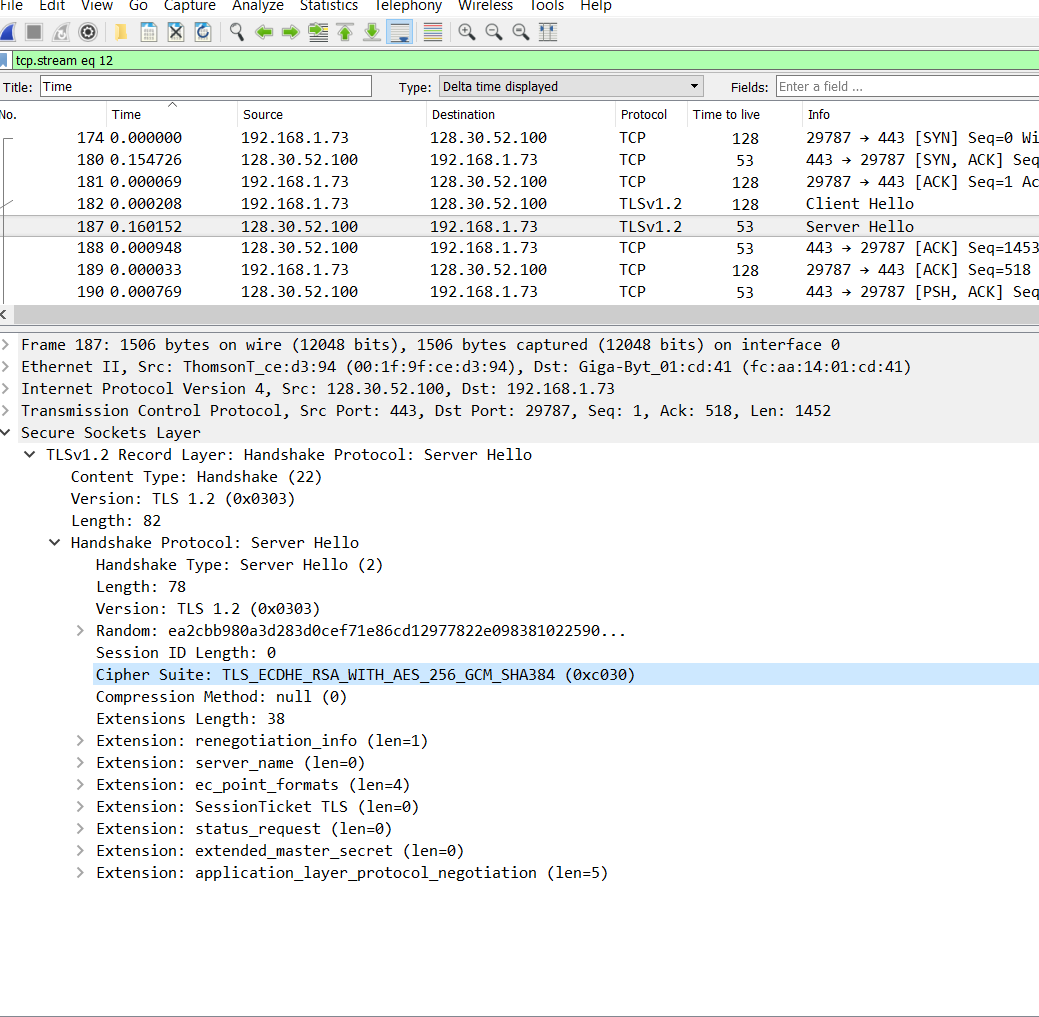 The server sends its public certificate, along with all the other ICA certificates in the certificate chain, a certificate status, a server key exchange, which includes the parameters used for the DH algorigthm, and server hello done. (click on the image to enlarge) 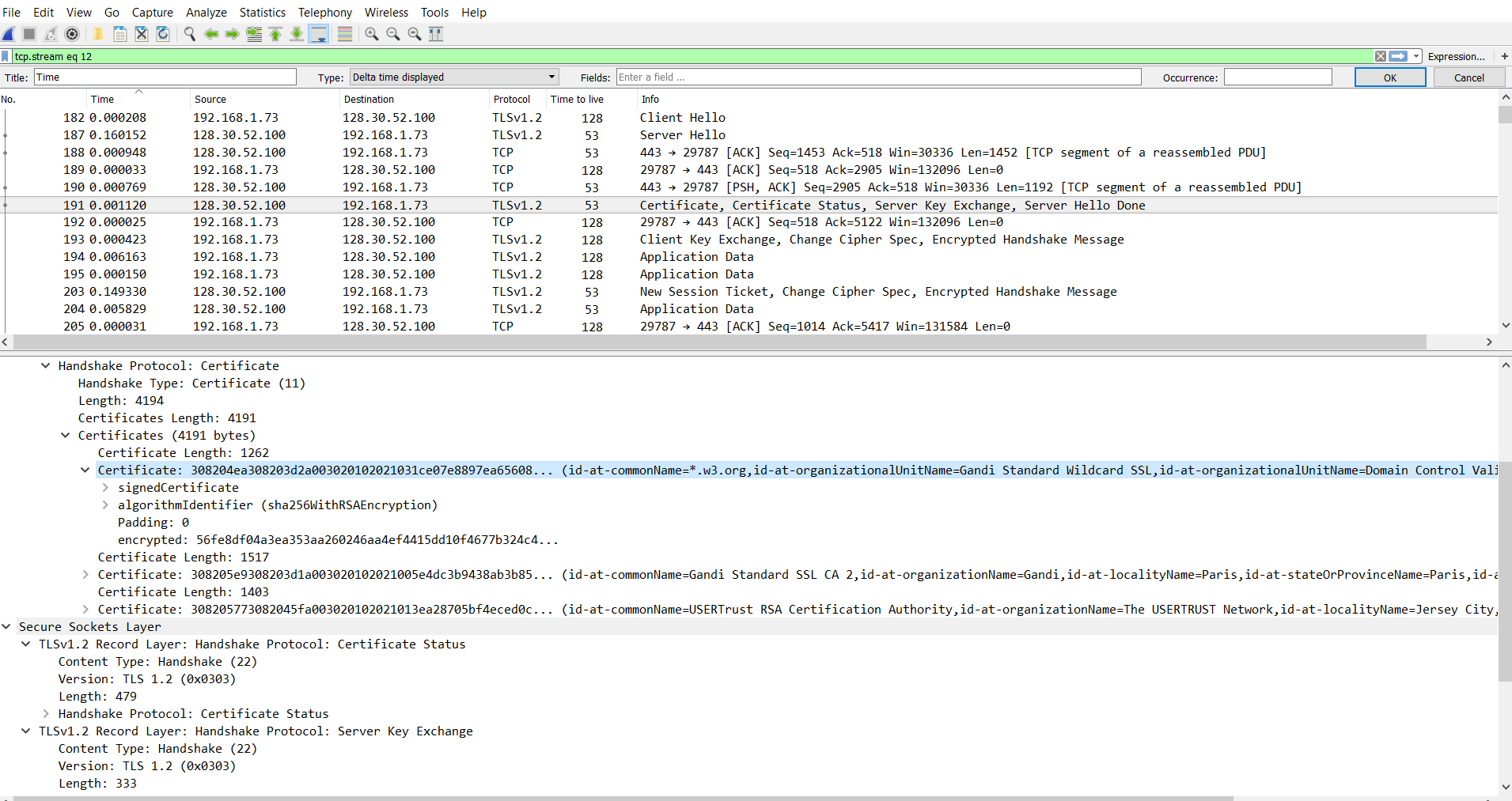 The certificate status message validates whether the server’s X.509 digital certificate is revoked or not, it is ascertained by contacting a designated OCSP (Online Certificate Status Protocol) server. 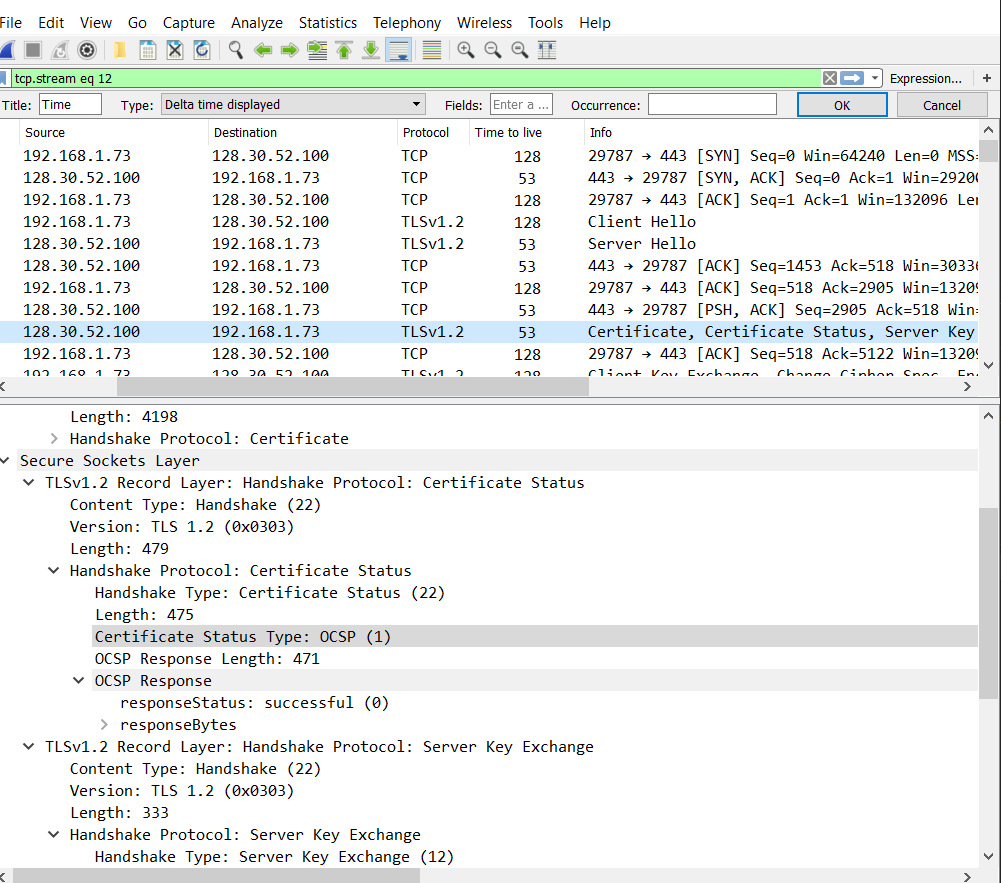 this was requested in the client hello message 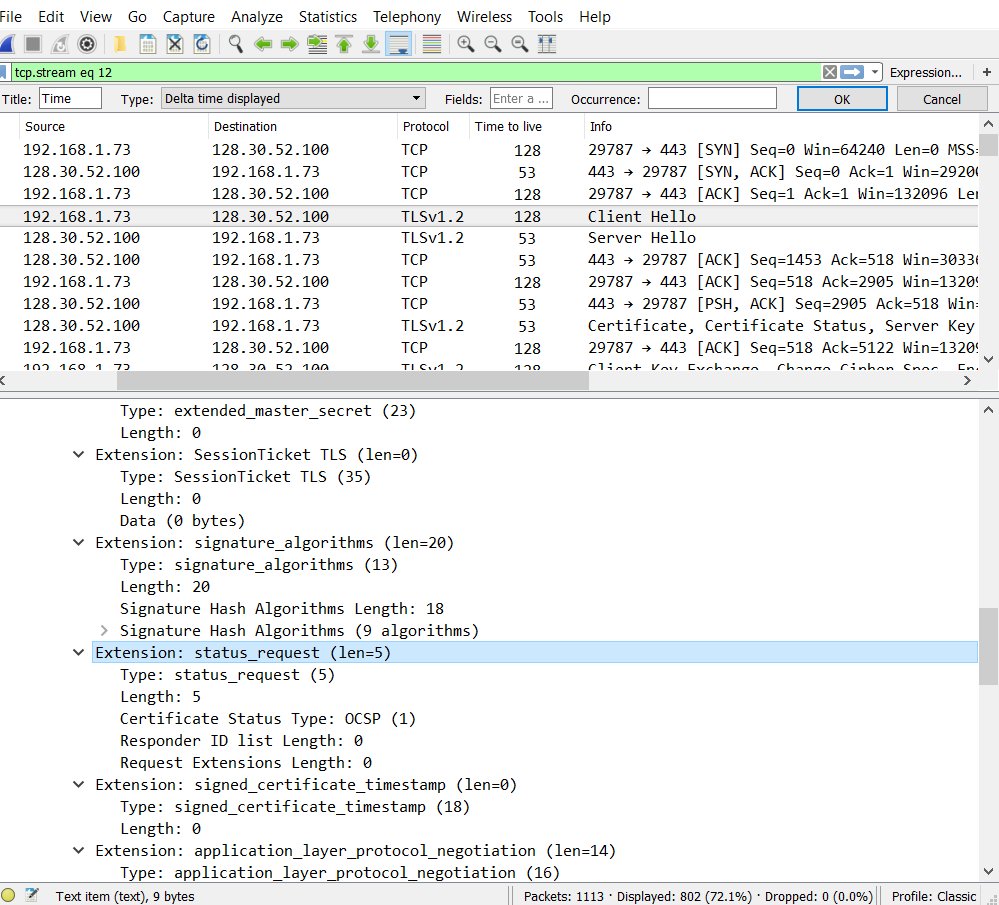 The client sends a client key exchange message, which includes the parameters for DH key exchange, a change cipher spec and encrypted handshake message. The change cipher spec protocol is used to inform the server that all the subsequent messages will be encrypted with the negotiated algorithms and keys. What wireshark shows as encrypted handshake message is the finished message which is a hash of all the messages previously exchanged along with a label (“client finished”), and indicates that the the tls negotiation is finished for the client. (click on the image to enlarge) 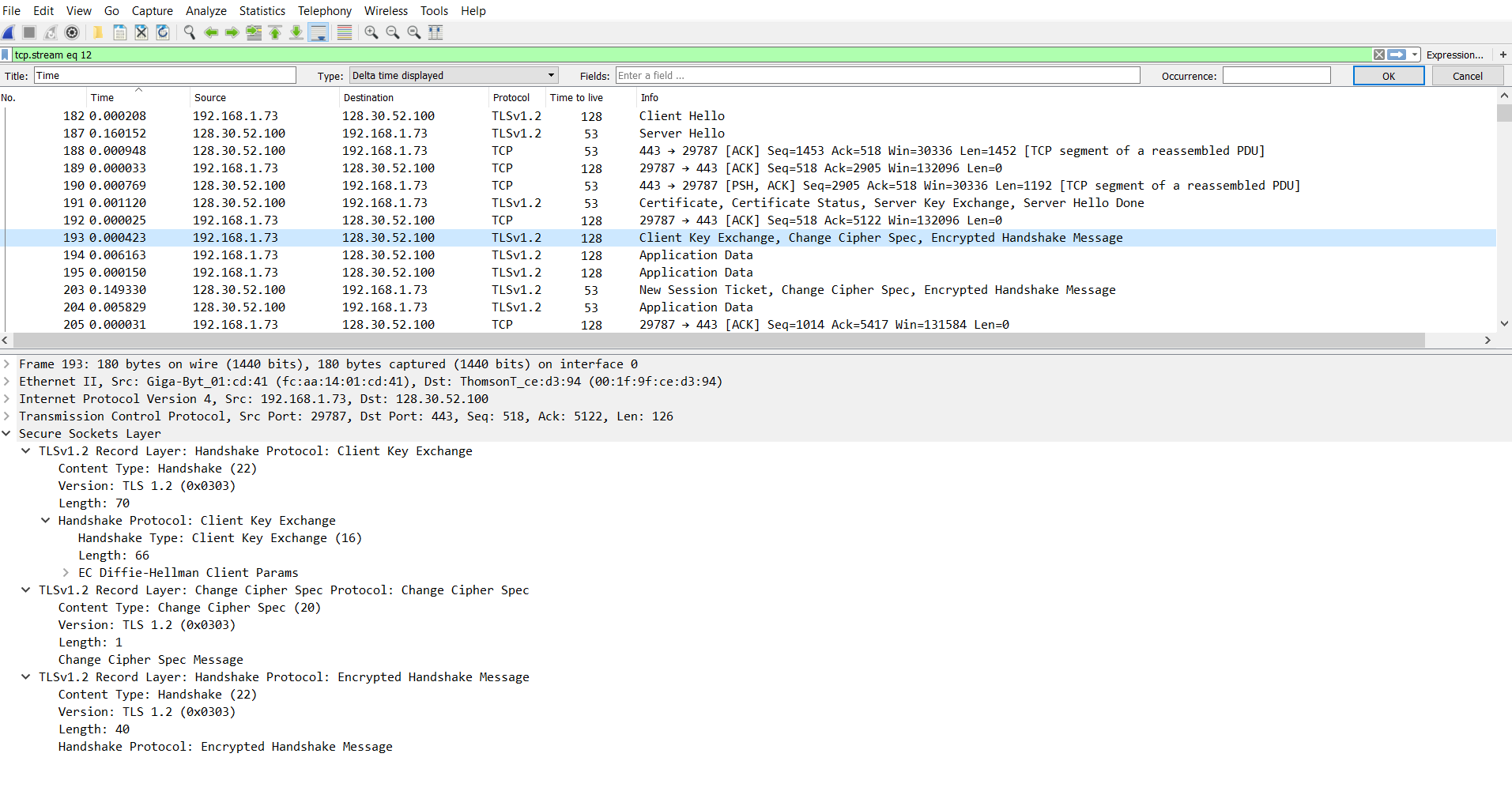 The server sends a TLS session ticket, a change cipher spec and an encrypted handshake message. The TLS session ticket identifies the session. The TLS session is an association between the client and the server. Multiple connections can be associated with one session. Security parameters for session can be shared among connections. Session state is stored after the handshake.When a new connection is established, the client and the server agree to reuse the previous keys, so they only do an abbreviated handshake instead of a full handshake. Because the generation of the keys is very computationally intensive, using the same tls security parameters increases the performace by about 20%.

The change cipher spec protocol is used to inform the client that all the subsequent messages will be encrypted with the negotiated algorithms and keys. What wireshark shows as encrypted handshake message is the finished message which is a hash of all the messages previously exchanged along with a label (“server finished”), and indicates that the the tls negotiation is finished for the client. (click on the image to enlarge) 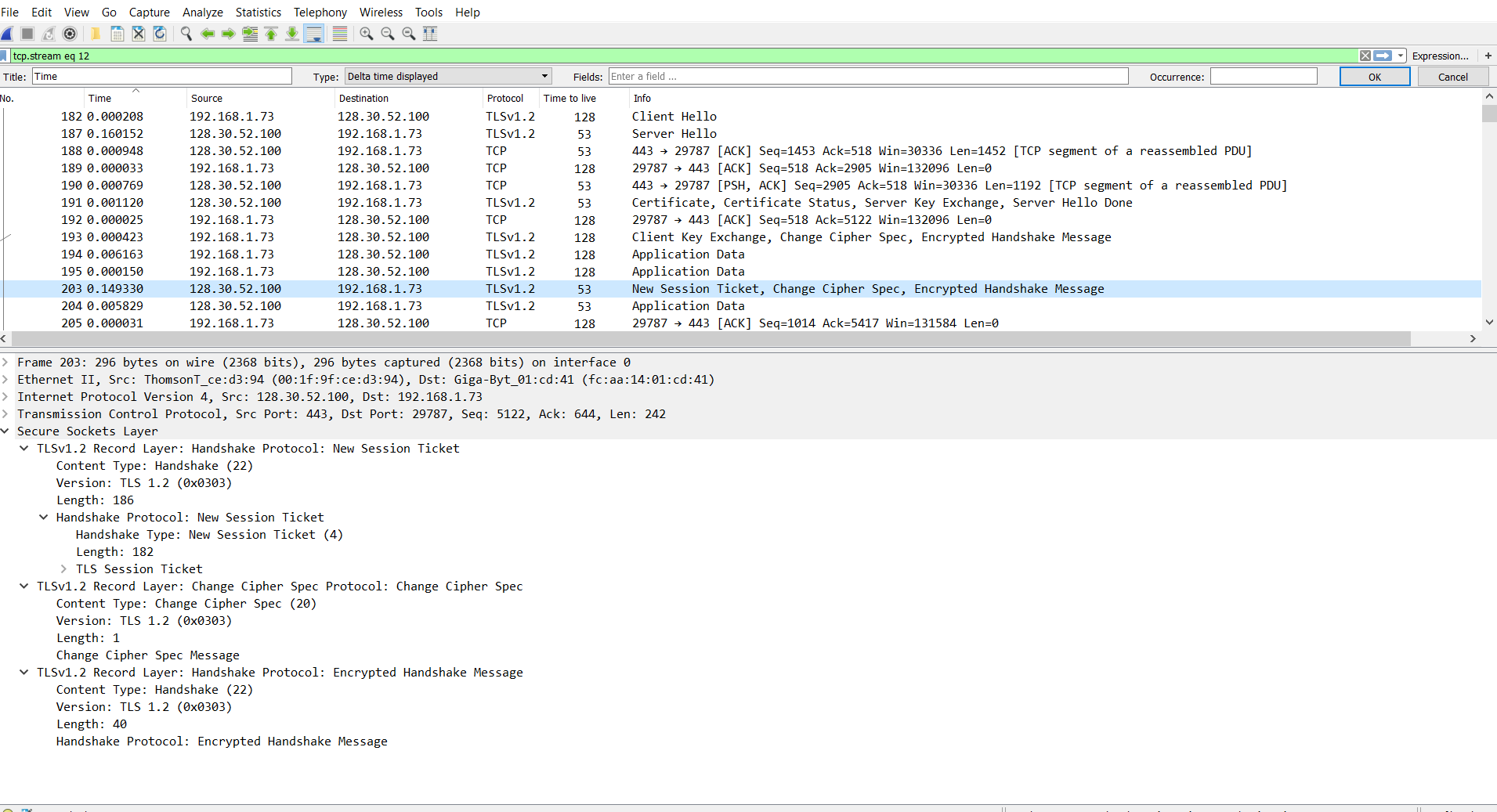 The client and server can now exchange application data using the symmetric encryption and session key.